April 8-10, 2004 - Deconstruction & rebuilding of the front end.  I am using the front end of a 1981 Honda CX500.  As you can see from the following photos, I cut off the front end, took it apart, got a new tire & talked to the local Honda mechanic who said that it was in better condition than I thought.  So, after cleaning the parts, I put it back together.   Carolyn & I are anxious to go down the road...so anxious, we sit in it as much as possible!

Here's the most recent photos: 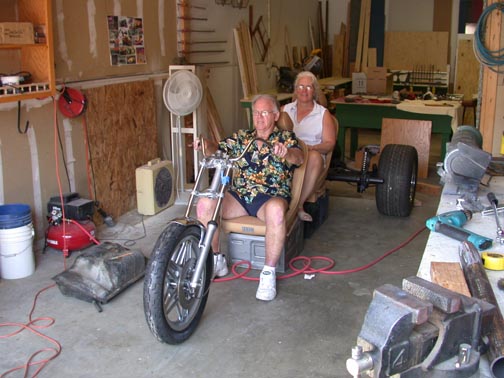 You see us goin' down the highway???

April 14, 2004 - I was able to get my idea for a tow hitch to the welder and made up.  He thought it turned out to look like an elephant, so he drew it!  I'm really going to like working with this guy!

I am so anxious about getting the trike done.  I can hardly wait!!!  Here's some photos of the hitch, front end and the current status of the engine (like my cannons???) 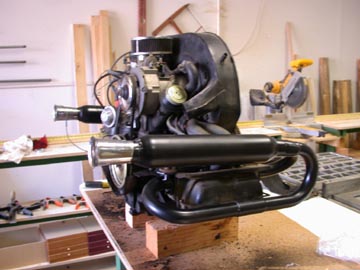 April 15, 2004 -  As I said yesterday, I can hardly wait to get this trike done...so, I continue to work away at little projects.  Hopefully, the welder and I will be able to work on the frame this weekend.  In the meantime, I am planning.  The photos below are of me making a frame for the gas tank.  Scott, my brother Mark, and Don were scared that the tank was going to blow up...with the precautions I took, it was just fine.  Its fun to see everyone's reactions when they walk by my shop.  Several people are keeping track of my progress...just like when I made my Maxitear.  Here's a couple more photos.

April 17, 2004 - ITS A ROLLING CHASSIS!!!  Today was a major milestone.   Dennis, the welder, came to my shop and the  creative juices were stirring.  Once we got started, he began to see what I was wanting and we were able to work well with each other.  The main frame is together, seats are positioned.  Hopefully, this next week we'll be able to hang the engine and start the body.  We began the day with welding a gusset to make the front end strong.  Then the main frame center and sides.  Once that was done, the front end was attached.  As you can see fro the photos, we had to hang it so Dennis could get to the bottom to weld.  Other than lunch, that was some of the most fun.  Even our neighbor Chris got into the action.

Here's to a great team!

April 21, 2004 - We spent another afternoon with Dennis.  He's a lot of fun to work with cuz he goes along with what I want and also will make suggestions for strength and safety.  He's now getting into the trike idea...who knows, maybe someday he'll build his own...Now on to business.  We got the frame almost done.  It's going a bit slower than I anticipated, but that's a good thing.  That's one of the downfalls of building something that is my design with no plans.  Here's some more pics.  The tow bar works great for getting the frame to and from Dennis'.

Now I can't wait until Friday.  Hopefully, we'll finish up the frame.

4/23/04 - Here we go...the frame is pretty well done, all we have to do now is put in tabs for the seats, seatbelts and other miscellaneous parts.  The belly pan is in and we've got a coat of paint on the whole thing.  I'm using the  VW trunk lid to make the engine cover.  I've cut the lid in half and will be welding it together to get rid of the VW look on the center.  More to do on Monday afternoon!

4/25/04 - No pics today, but we got several parts Saturday and we went to the shop this morning, set up the seats and sat in it....WOW, is all I can say.  It's getting really exciting to see the progress we've made in such a short time.  The body is next and it's going to be really cool...I am getting handlebars made for the trike this week.  Headlights will be here any day...we got tail lights yesterday (I'll save them for a surprise!).  More pics coming this week...keep checking back.